DOUBLE-SIDED FUME HOODS
DESIGNED FOR 360-DEGREE LABORATORY VIEWING
Like traditional fume hoods, a demonstration fume hood is a ventilated enclosure designed to protect its user from chemicals, dust, vapors, and other contaminants.

However, there is one major distinction between typical fume hoods and demonstration fume hoods. Instead of being enclosed on three sides with opaque material, they are enclosed by transparent safety glass. The transparent sides of the fume hood make it easy for viewers to see the interior workspaces, making demonstration fume hoods ideal for classroom and other learning environments in which 360-degree visibility is desired.

DEMONSTRATION FUME HOOD DESIGN
Demonstration fume hoods can be attached to the laboratory’s exhaust system or, in situations where dangers are minimal, can be ductless. In addition to bench-mounted and wall models, some ductless demonstration fume hoods are attached to wheeled carts, which is ideal in situations in which mobility is necessary such as moving the fume hoods from classroom to classroom. They are available in several different specifications and dimensions, depending upon application.

While most fume hoods have one horizontal or vertical sash at the front of the hood, demonstration fume hoods have the option of having two sashes, which allows for easier loading and viewing from both sides.

The interior and exterior of demonstration fume hoods can be made of several different materials, depending upon the specific chemicals, fumes, and contaminants it will be exposed to. To ensure the safety of its users, as well as the long life of the fume hood, 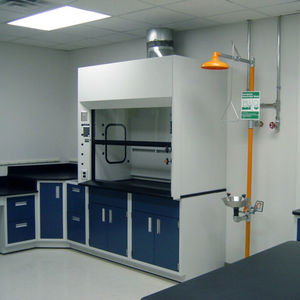 laboratory fume hood / for perchloric acid handling / exhaust / benchtop LS-700 series
Related Searches
*Prices are pre-tax. They exclude delivery charges and customs duties and do not include additional charges for installation or activation options. Prices are indicative only and may vary by country, with changes to the cost of raw materials and exchange rates.
Compare
Remove all
Compare up to 10 products